Production, among many other things, has often come to define death metal. The never-ending debate over Scott Burns creations, or Colin Richardson manned recordings, or the present-day arguments over the validity (and cleanliness) from the likes of Jason Suceof, Erik Rutan, and Russ Russell often serves as the dividing point for what is supposedly true, or not. However, the proof is often in the execution and songs, but a monstrous-sounding album can only help the cause. Just ask Spain’s Wormed, who with their second full-length Exodromos should open up another can of…worms…with just how awesome their album sounds.

Falling somewhere between the splintering barrage of Suffocation (all eras) and a more coherent Cryptopsy, Wormed manage to maintain the flow of brutality without ushering in banality. Do you like our terminology? (Ok, enough of that.) Besides the snapping riffs, avalanche of discord (see: “The Nonlocality Trilemma”), and stop-start roughage (“Darkflow Quadrivium”), the production is suitably warm and punchy. Seems that drummer Riky was having a good snare day during drum recordings, allowing him to become the album’s center. The man utterly ravages on cuts such as “Tautochrone” and the fantastic “Stellar Depopulation.” Best of all: there’s not a trigger in sight. What a novelty.

Wormed’s approach might be a cause we’ve seen numerous times, but their execution and successful attempts at being creatively brutal are what make Exodromos a success. Hard to bash something as ferocious and unhinged as this…these guys are searing as they come. 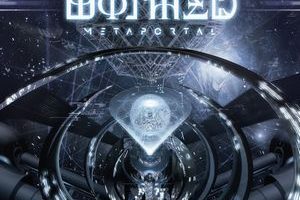