Most voracious readers of this webzine know that a number of writers profess a deep appreciation for the best acts in the melodic death metal genre, and have for quite some time. So extra care is given when taking in another act like Germany’s Words of Farewell – a sextet that formed in 2007 and slowly worked up the self-release ranks into their debut album Immersion, which AFM picked up for wider distribution during 2012.

The Black Wild Yonder is the band’s second full-length, and while their affinity for the original Gothenburg scene is apparent between the Soilwork-like musical hooks and In Flames/Dark Tranquillity harmonies, these musicians also live for a little bit of progressive/ technical showmanship. Henrik Tschierschky and Erik ‘EG’ GaBmus lay down thick, heavy chord combinations that in conjunction with Tristian Wegner’s off-time drumming bring up a slight Meshuggah element on highlights “Telltale Notion” and the moody “Antibiosis.”

Vocally, Alexander Otto has a deep bellow to his word spew, forceful and expressive to fit the mood of a song- his whispers chilling to make “Damaged Beyond Repair” that much more dynamic during the harsher choruses and subsequent verses. A lot of the rhythm choices and progressive parts possess a Danish charm – runs that make “Beauty in Passing” as enjoyable as classic Mercenary or Darkane, where keyboardist Leo Wichmann joins the axemen in a couple of synchronistic breaks to up the melody factor.

I even dug a little bit of “Phantom of the Opera” orientated spider web choices for “Outer Rim,” so know that Words of Farewell live for distinguishing themselves based on all eras of metal history. The Black Wild Yonder keeps the eyes on the melodic death prize: hooks aplenty, savage vocals, and the right amount of ripping riffs to propel audiences in aural ecstasy.

Their official Facebook page describes their sound as “A pleasant punch in the face for every Death Metal loving creature out there.” Who is going to argue with that? 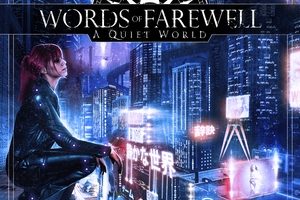