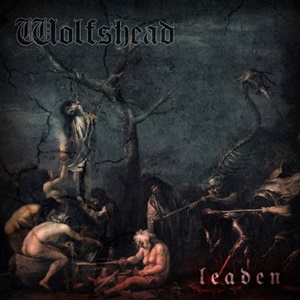 Sitting in Finnish lands, Wolfshead embody that old school heaviness somewhere between heaven and hell (yes, a Black Sabbath reference), finally issuing their debut full-length Leaden after three previous promo/EP releases during the last five years. Cooking up a musical stew of influences that rear back into the 60’s/70’s/early 80’s, it’s obvious that the quartet aim to keep the focus on doom, traditional, and NWOBHM riffing and conjoining melodies, the tempos swinging and grooving along in proper support.

Wolfshead succeeds in the execution and delivery of songs like “When the Stars are Right” and the bouncy, rhythm-oriented opener “Vukodlak” out of the organic musical interplay that takes shape due to the main hooks. It can be a specific Vesa Karppinen bass line that builds into churning, low-end riffs, or a steady snare snap from Jussi Risto that aligns into impressive 4/4 transitional mechanics for bluesy breaks, but the band understand the need for dynamic harmonies when settling into these songs. Additional narrative or sound effect elements weave in and out of the eight tracks – the instrumental “Winds Over Potter’s Field” a military march piece with intriguing flute-oriented keyboard spots – heightening anticipation for the next doom or classic metal song. Proper wah-wah triad combinations from axe-slayer Ari Rajaniemi send gloom and despair into the almost eight-minute closer “The Hangman” – vocalist Tero Laine varying his normal gritty, semi-Lemmy Kilmeister delivery into a somber, plaintive melodic stance that works well in its measured movements.

If you look at the band’s sound, they take equal inspiration from American and British bands – there’s something about the feel and atmosphere of say “Children Shouldn’t Play with Dead Things” that harkens back to The Obsessed or early Trouble, while “Division of the Damned” has that punch/spirit straight out of the Mercyful Fate/Judas Priest school. Keeping the record under 40 minutes subscribes again to their throwback ethics – plus the grey cover art accurately prepares the listener for what’s in store. It’s been a great year for doom, and Wolfshead give us another product to treasure.