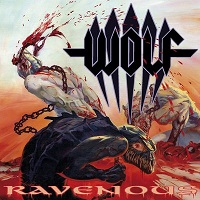 Wolf is not the first band mentioned when discussion opens on retro metal, but by golly, they’re probably the best throwback metal band going. Starting with 2002’s signpost Black Wings, the Swedes have taken proto Maiden melodies, the songwriting smarts of Priest, and the tongue and cheek of Helloween and rolled into one solid ball of rock. The follow-up to 2006’s strong The Black Flame, Ravenous is not a step forward, rather a lateral move, which is what you’re supposed to do when paying homage to the greats.

Singer/guitarist/mainman Niklas Stalvind’s vocals remain the real selling point with Wolf. While the band is not afraid to dole out twin g’s at the drop of a hat (see opener “Speed On” and “Secrets We Keep”), it is Stalvind’s tenacious classic metal throat that makes the killer “Voodoo” and fun “Mr. Twisted” go. Stalvind never gets in the way of a good riff or has to over-extend himself, which is probably why he’s so effective.

Lots of nods to Maiden on this one, moreso than on previous releases. Starting with “Curse You Salem,” an indirect, but probably direct nod “Wrathchild,” Wolf is most at home when weaving fiery twin harmonies. “Whiskey Psycho Hellions” and “Hail Caesar” are two additional cuts that drive home this point, especially the former, which sees Stalvind and fellow guitarist Johannes Axeman trade some rather tasty licks.

In regards to this scribe’s statement that Wolf are the best throwback metal band going, it’s true primarily in the sense it all sounds fresh. Wolf take a little bit of everything that is right in the classic metal world, exploit it to the fullest, then move onto the next thing. Ravenous. And while the words “fresh” and “classic metal” seem like oil and water, Wolf torch this notion. That’s why they’re the best at what they do.