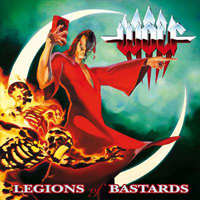 Wolf’s worst day is still better than a lot of other traditional metal band’s best day, but Legions of Bastards is the first album from the Swedes that falls below their normally stellar clip. The band’s formula of steely riffs, punchy choruses, and Niklas Stålvind’s razor-sharp vocals is still intact, with the usual array of topics from serial killers to murderers omni-present. It just comes up short, that’s all.

Stålvind is the perpetual pace-pusher for Wolf (nice alliteration), often signalling any type of momentum shift when his imitable throat gets into gear. So when he sputters and croaks during opener “Vicious Companions,” it’s a tell-tale sign of what’s to come. There’s no real hook-and-sinker moment from the man ala early cuts like “I Am the Devil” or “The Bite,” and musically, there’s no girth or Maiden-happy melodies to feed off of.

Retread topics like headbanging are explored during the flat “Skull Crusher,” and the band’s preponderance of serial killer/creepy dude themes are very much in supply during “Full Moon Possession.” There’s some lively moments during the solo portions of “False Preacher” and Stålvind kicks his vocal kicks during the chorus of “K-141 Kursk,” so things aren’t totally a lost cause here.

Because of Wolf’s standing as one of the top traditional metal bands, they get a free pass on this one. A shoddy album here and there won’t take away from the glory that is 2002’s Black Wings or 2009’s cunning Ravenous. The Swedes are a lot better than what is demonstrated here.