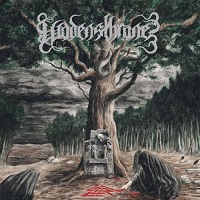 There’s something about black metal from the UK and their tendency toward glorious pagan/ancient themes (Cradle of Filth doesn’t count here) that just brings so much joy to my dorkiest side. All the mythological and lore bits and its contextual place in the historical past just washes over, emboldening (at least in this case) some of the most well executed black metal ever put to tape. On Curse Wodensthrone (Woden, as if the name didn’t give it away, being an Anglo-Saxon compliment to the Scandinavian Odin, the more you know!) have outdone not only their debut and in the process pieced together over an hour of some of the most splendid black metal you will find this year.

The expected but surprisingly non-arbitrary short intro piece “The Remaining Few” sets the stage for something that is a surprising constant throughout: atmosphere. No matter the blackened staple sound in the forefront there exists perpetually behind it a dreamy and woodsy background, no matter the predominance of blastbeats or furious tremolo sections. On something like “First Light” there is a lot of continuous interplay, the labyrinth 11 minute running time filled from end to end with hazy sections and razor sharp blast-a-thons. This song, like most all on Curse, develops at its own pace, most of these songs are quite lengthy, the intro being the only song not weighing in over six minutes.

That being said, while the songs do require some patience to become acquainted with, they’re also very easy to be absorbed by. As quiet gives way to thunderous gives way to the blistering in “Wyrgþu” the enormous wealth of influences the band draws from come to play as the marriage of synth, doom, and black all come together in glorious fashion.

In looking back across the album it’s difficult to pick out the most sublime highlights. This is due both to the fact of how many lay spread throughout each song and indeed how sonically similar most of the album is. While normally would contribute to a yawn-inducing state of sameyness in most albums (and indeed, I’m certain I’ve mentioned it in previous reviews) here it serves as part of an enormous and consistent thematic continuum. Closer “The Name of The Wind” begins in an almost jangly and hazy fashion, a burning midsection giving way to a colossal and crashing doom-laden finale, topped off with the unmistakable and unmatchable vocals of Esoteric’s Greg Chandler, an absolutely stunning finish to an already stellar album.

Given how serious the band takes the themes that lay beneath the band’s sonic imprint and lyrical points, it’s easy for all my nerdisms to get hung up on just that. Wodensthrone makes it a double-pronged kill by backing up those rich themes with equally rich and complex music, another fantastic release in a year already stuffed to the gills with them.