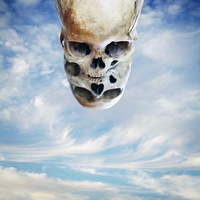 A rather full and voluminous-sound power trio from Portland-to-Los Angeles, Wizard Rifle fashion themselves as an esoteric doom/prog proposition, which in these convoluted times, may not be such a bad thing. Originally formed as just a two-piece between drummer Sam Ford and guitarist Max Dameron, the band has subjected themselves to the now normalized not-so-glamourous touring life as a mid-to-low-tiered band. But, through all of the apparent long drives, obviously bad food, and sleep deprivation, Wizard Rifle have quite a bit of pep and spunk to be found on their sophomore effort, Here in the Deadlights.

Riff relatives of Wizard Rifle include High on Fire for the brute, and YOB for the psychedelic moments, of which there are a few. The band seems to function best when they’re front-loaded with sludgy punk, as found on the zippy “Buzzsaw Babes” and follow-up tune, “Paul the Sky Tyrant,” a sort of mini-battering ram of a tune with ample drum action from Ford, who turns in a stellar performance. Considering most of Ford’s peers are nothing more than basic time-keepers, his elaborate and pulsating work across the album’s five cuts is worthy of praise. As for those tripped-out moments, they come via “Psychodynamo,” where upon a proggy intro gives way to spastic rock, which ends up being the album’s penultimate moment.

With no real straight line to work from, Here in the Deadlights doesn’t pinpoint a specific audience, nor should it have to. Rather, it’s a quality off-the-beaten-path offering that will probably get more nods in the doom sphere than anything else, although there’s a chance some of those lads might be turned off by some of the album’s more frothy moments. Still, Here in the Deadlights is pretty daunting stuff when you think about it in a grander context.