Within Temptation – The Unforgiving (Roadrunner Records) 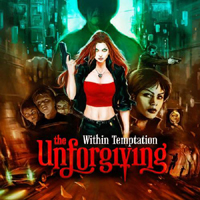 Still a few pegs below Nightwish, Within Temptation have gradually distanced themselves from their halcyon Goth metal days and it shows on their fifth album, The Unforgiving. Fronted by Sharon den Adel (she’s quite the looker, in case you haven’t noticed), WT’s sound exists primarily to suit her stratospheric vocals. And while they don’t have the pompous disposition of the aforementioned Nightwish or metal gusto of Epica, WT is almost as formidable.Almost.

Very little metal to be found here, save for album opener “Shot In the Dark” (no, it’s not the Ozzy song), and “Iron,” where there’s a tidal wave of momentum augmented by a big, fancy chorus from Den Adel. The spunky “In the Middle of the Night,” works in sort of a Euro power metal fashion, while the usual clunkers (there’s always a few on every WT album) appear in the form of “Where Is the Edge,” “Lost,” and “A Demon’s Fate.”

Two HUGE winners here, which are lead single “Faster” and “Sinead,” both of which could be two of the better songs in the Within Temptation catalog. Den Adel goes for broke on “Faster,” with her employing some of upper-register vocals in the chorus, and is aided by some haughty 80’s synths. “Sinead,” on the other hand, is a mind-numbingly catchy dance-pop song with a sticky-sweet chorus and bouncy verse that for comparisons sake is the type of song Nightwish tried to pull off with “Wish I Had An Angel” and “Amaranth.” “Sinead” annihilates both.

Quite unlikely this will fully register with the metal crowd Within Temptation once ran with, but den Adel has some star power to her, which is the biggest takeaway from The Unforgiving. This is pretty light and fluffy stuff (including the comic book storyline), although it’s awfully to resist a couple of these songs, especially “Sinead,” which makes it very tempting to break out into a full-on dance. Not really, but you get the idea…