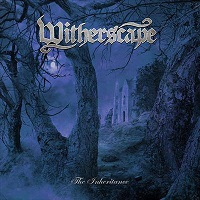 Between DR and our Blistering.com predecessor, perhaps no name has been dropped more than Dan Swanö’s. As a producer and multi-instrumentalist, Swanö’s imprint is on some extraordinarily vital bodies of work, especially the mid-90’s output of Dissection, Katatonia, and Opeth (as producer), not to mention his own breakthrough act, Edge of Sanity. A project for Swanö isn’t necessarily something new (see: his long-running Nightingale, Unicorn, and stint in Bloodbath), but, Witherscape is the most significant project of his in years, and the band’s The Inheritance debut doesn’t disappoint.

Joined by guitarist Ragnar Widerbeg, the approach Swanö took in Witherscape was to tap into the vaunted Edge of Sanity days, while staying in line with traditional metal. The progressive touches and death bellows from Swanö place the album into an entirely different category, one that is rife with artistic strokes that could only come from experience. As such, you’re going to be hit with songwriter-like acoustic guitars (“Dead For A Day”), serpentine mini-epics (“Astrid Falls”) and potent action-metal (“The Math of the Myth”), where some hand-clap action is introduced in the song’s second verse. (Swanö would admit to this scribe that the influence for the claps came from Judas Priest’s “Starbreaker.”)

DR would like to rearrange the faces of those who claim this is an Opeth knock-off, or is some attempt at piggybacking off Akerfeldt’s stature in the scene. History tells us that Swanö (while in Edge of Sanity) was already doing this stuff in the early 90’s, predating Orchid by several years. On any level, The Inheritance is striking, careening from vicious death/prog (“To the Calling of Blood and Deams”) to tender odes (“Crawning from Validity”). The final product is one of year’s most well-rounded and alluring albums.