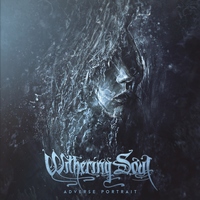 The universality of music in this day and age can make it rather difficult to pinpoint where exactly a band is from if you are hearing it blindly. No longer bound to having just regional/local influences, the Internet has long tossed those limitations out the door. So if you hear some melodic black/death metal that feels strongly of Scandinavia’s first wave, such as Withering Soul’s Adverse Portrait, you can’t just assume they are from Europe. In fact, the band hails from Chicago.

Withering Soul’s third album (who seem to take their time with releases with four years since No Closure and go back another seven to their debut) has a largely Scandinavian take on melodic black/death metal. Early Dimmu Borgir (before they went overboard with the keys) or Naglfar are good indicators of what to expect from Withering Soul. What makes them jump out a bit more is the focus on guitars, as opposed to synths. Much of the material is speedy, and relies on thrashy, melodic riffs to get the point across. The thrash/blast combo is their strongest asset, as heard in highlights “No Longer Within,” and “Hex Illusion.” The vocals are mostly of the standard issue black metal variety, but some tracks such as “The Dreadful Echo” utilize clean vocals. The clean vocals can be hit or miss unfortunately. The aforementioned track has an almost gothic tone to them which comes out of nowhere. When they don’t go for the lower range, the cleans can be quite effective (see “Awakening”).

Adverse Portrait is a pleasant piece of melodic black/death metal that should please fans of the sound. Other than the diminished emphasis on keys and full-out assault on some tracks, there’s not much to differentiate their attack, but it’s all effectively written material with an ear for melody.