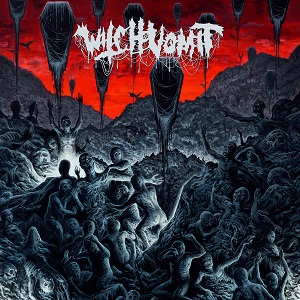 Building up a bit of a cult following within the underground community, Witch Vomit has released two previous full-lengths and a few shorter releases over their almost 10 year existence to date. Abhorrent Rapture was a ‘surprise’ EP that released, two years past their last effort, Buried Deep in a Bottomless Grave. It delivers exactly what it should for fans of dungeon-y death metal.

While there’s a bit of that cavernous, murky feel to Witch Vomit, they don’t simply adhere to it. There’s buzzing guitars and low, ominous vocals. But it doesn’t feel like a totally slimy experience. Certainly, a razorsharp track like the title track has loads of that gritty, old school energy but the sheer franticness of it does a great job at offsetting that “Incantation-y” feeling that many bands are rendered lifeless by. Instead, the thundering and occasionally jarring feel to the band’s take on old school death metal (see “Necrometamorphosis”) is bolstered by their ability to implant some furious solos and creepy melodies into the mixture of components. The bonus of it being an EP is that at only four songs, the aggression can go full tilt without it becoming an issue – Abhorrent Rapture simply invigorates the listener and readies them for more (instead of blurring and teetering out by the finish).

Short enough to whet the appetite, but not leave you feeling overstuffed, Abhorrent Rapture is good old school death metal done right. It can rage and thunder, and Witch Vomit know just which buttons to push to keep the traditions in check without feeling tired or clichéd.