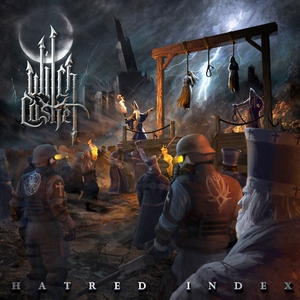 Containing several members from the symphonic black metal band Sothis, Witch Casket is a new offering that still contains some blackened vibes to it, yet the bombast and symphonic elements are long by the wayside. Given the tidal shift away from that particular subgenre, it’s probably for the best anyways. Witch Casket finds themselves in a more diverse and less readily identifiable position, serving as a solid starting position for the act.

The 5-song release serves as an introduction to the act, which favors a mixture of more brutal heaviness with sneaky melodies. Starting off from the onset with the title track, there’s a grandiose feeling to the band’s sound, from the ripping blastbeats that introduce it, to the more burly death metal groove that finds its niche as the song rolls along. A clear death/black hybrid in tone (with yes, some light synths but nothing too predominate), it’s clear that the masters have been observed, but not just in the blackened realms. The more obvious points of Dimmu or Behemoth certainly exist, but they lean into more European ‘90s death metal (of several flavors) to branch it out and dole out some contrast. The melodies and solos present have a timeless feel to them, offering to enrich the landscape without becoming predictable or diluting the aggression. Some stateside influences also further supplement the sound, with more American groove coming out with “That Damn Devil” to plant a more immediate feel to the track.

All of the parts come together well though, particularly for a first offering, providing some concrete evidence that Witch Casket are onto something. It may not reinvent the wheel, but the distinct influences give it their best effort to make Hatred Index more fresh (and not to mention catchy) than some of their brethren who are trying their hand at blackened death metal. Let’s see where they take things from here.