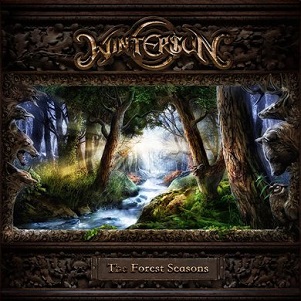 Odd…all the back-and-forth between Wintersun and Nuclear Blast over funding for Time II (or funding a studio to record Time II), has been cast aside in favor of The Forest Seasons. To that end, no mention was made the Finns were working on such an album, but here it is, their third in a career that should have many more to their credit. (Wintersun, if any band, are over-meticulous, perhaps to a fault.)

Four songs here, each meant to represent a change in season and its subsequent emotional effect. Wintersun’s ability to create otherworldly, somewhat galactic epic metal comes into play here, with the band all but foregoing their early folk elements for a nuanced, symphonic foray that is crammed with bravado. Oddly, main dude Jari Mäenpää is a bit high in the mix, often doing battle with the lush instrumentation. You’ll hear it on opener “Awaken from the Dark Slumber (Spring),” a fairly traditional Wintersun number that is every bit as vast as expected.

The album gets into motion via “The Forest That Weeps (Summer),” where a sub-black metal pulse drives in a cascade of some of Mäenpää’s most winding riffing to date, further accentuated by his soaring clean vocals. The turbulent “Eternal Darkness (Autumn),” is the album’s true climax, a soundtrack-like escapade that piles on the tracks (lots of layering here) along with some lovely melodies, while the soft, if not dramatic “Loneliness (Winter),” finds Mäenpää feverishly belting to the skies, which again, is a reflection of how far his clean vocals have come.

A band continually threatened to be swallowed by the weight of expectations, Wintersun should further stave off criticism and fan frustration with The Forest Seasons. The degree of detail and matter the album contains is simply immense, allowing Wintersun to remain at the top of the Finnish epic metal mountain.