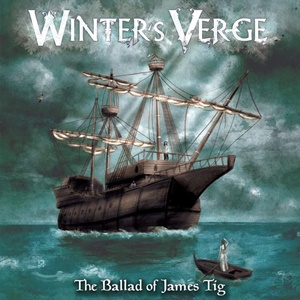 A veteran of the melodic power metal scene since 2005, Winter’s Verge have released four studio albums and three EP’s, spanning labels from Limb Music to Massacre Records, as well as recently going back the independent route for 2015’s IV and the 2017 follow-up The Wolves of Tiberon. The sextet now under the Pride & Joy Music umbrella release an intriguing concept story for The Ballad of James Tig. Local Cyprus author and playwright Frixos Masouras wrote the concept and lyrics for the record – James Tig as the main character, a boy losing his family at sea sets about finding Killagorak, a legendary sea monster that he believes killed his family.

A seasoned outfit enjoys the dynamic journey a conceptual storyline takes – allowing for a mixture of atmosphere and contextual shifts from the cinematic, theatrical, epic, and conventional aspects along the musical and vocal fronts. Magic of the North singer Teodora Stoyanova Freya adds the female touch portraying Nina and appearing numerous times with main vocalist George Charalambous right away on the stirring opener “It Begins” – a semi-ballad in the vein of latter day Savatage as their unison melodies go hand in hand to the cultural twin guitar harmony lines and bombastic keyboard orchestration. Power riffing turns up the energy for “A Thousand Souls” – while the emotionally compelling “Timeless” is a centerpiece ballad featuring quieter guitars, keyboards, and proper orchestration/background choir angles to keep ears attuned for the second half of the record. A heavier track such as “I Accept” stands out even more, proving Winter’s Verge can excel in their melodic, conventional power metal mold – the song containing a killer quick hitting guitar lead and a strong verse/chorus template, very much reminding me of classic Tad Morose even with the quieter keyboard instrumental transitional moments. Over the course of the nine tracks and forty-eight plus minutes of material, the sense of roller coaster tension plays out – making the longest cut “The Sea” at almost eight-minutes a back half key highlight, featuring a cavalcade of multi-part vocal melodies (Teodora using her upper operatic register) , keyboard and guitar layers, and necessary narrative aspects to drive the folk-ish title cut finish home.

Winter’s Verge takes a bit of a risk with this record – but followers will be rewarded as there are times where expanding one’s power metal base can pay dividends for a memorable record. The Ballad of James Tig as a departure works and should allow the band to feel more invigorated and creative going forward.