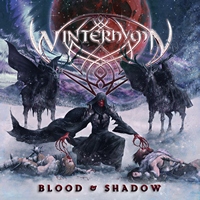 Adding to the growing notion that American bands can present folk metal that is just as epic and powerful as Europe’s legions, Winterhymn hails from the state of Ohio. Their second full-length album, coming five years after Songs for the Slain, continues to build on what the band has accomplished so far. Those in the mood for some grandiose folk metal take heed.

If there’s one fine compliment that can be given to Winterhymn, it’s how diverse they keep the hour-long album. Songs hit at every imaginable tempo, moving from the vicious and melodic death-driven “The Wolf’s Head” to the more catchy and mid-tempo anthem of “In Shadow We Ride,” to the soothing ballad “Seafarer.” One will immediately notice the inclusion of the violin into the band’s sound, and this is also an area where they stand out. They provide an additional dimension for the band, able to pull out some melancholy to counter the more aggressive segments (“Blood of the Moon”), inject some upbeat and catchy moments (“The Summoning”), or provide some added grandeur at any given time (“The Chosen End”). All this while making sure that the rest of the instrumentation gets its due. Winterhymn has no issue in allowing any piece (synth, guitar, vocals) to stand out for a moment before diving back into more frantic waters. The songwriting never veers out of the traditional folk territory, but it’s quite compelling from start to finish.

An all-around solid mix of folk metal that is equal parts epic rhythms and aggressive implementation. Blood & Shadow stands neck and neck with the strongest the genre has to offer, and provides an atmosphere that maintains the folk feelings without going too far over the top. Worth investigating if you crave folk metal that moves into epic and upbeat territory but avoids the cheese that sometimes accompanies it.