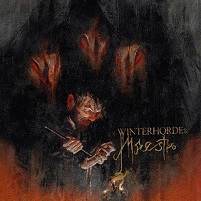 Lots ‘o familiar faces along for the ride on Winterhorde’s Maestro. In-demand artist Travis Smith handled cover art duties; Triptykon guitarist/producer V. Santura manned the production boards; and Jens Borgen was in charge of mixing. For such an unorthodox band from Israel, snagging such big-names no doubt had to be quite the experience, but as per the usual, none of that matters if the tunes aren’t up to snuff. On Maestro (the band’s third full-length and first since 2010), the band whips up a symphonic, quasi-avant garde storm, turning in an unpredictable album, to say the least.

We’re a bit inclined to throw the Septicflesh-on-Solefald tag on Winterhorde. The brute force of some of the band’s tunes would make up for the Septicflesh, while the routine dalliances with esoteric prog line them up with Solefald. Now, Winterhorde are far more digestible than Solefald could ever be, evidence they’re capable of pulling back on their progged-out moments. Yet there are plenty. The ramped-up, multi-choral landscape found on “Worms of Souls” is a real trip, in particular when female operatic vocals join the fun. “They Came with Eyes of Fire” starts off serene enough, but then descends into a pit of Therion on-speed, if you will. Elsewhere, further exercises with clean vocals on the album’s title track (the classical guitar break halfway through the song is excellent), while a saxophone solo introduces “Cold,” only adding to Maestro’s unrelenting experimental bent.

Winderhorde, at times, come a bit too close to going overboard with their experimentations. It might be wise for someone (i.e. V. Santura) to tap the band on the shoulder next ‘go round and have them chill out on the notion they have to be many things at once. Maestro is certainly the diabolical head-spin it was intended to be, but Winterhorde’s routine dives into the weird may eventually do them in.