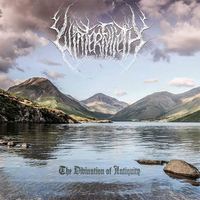 Winterfylleth. If you don’t know them by now, you absolutely should. And if you’re paying attention to the metalsphere you’d also know that they’ve emerged as one of the top pagan/atmospheric black metal acts on the planet, because they absolutely are. Their 2012 masterpiece, The Threnody of Triumph, sets the bar sky-high for these Anglo-Saxons (our review of perfect marks can be seen by clicking here). Do they follow up this remarkable achievement with an even better effort? Possibly. What is clear after spending a few short weeks with The Divination of Antiquity, is that it’s handily one of the best releases of the year and is a stellar album.

The best bands have a sound all their own, and Winterfylleth’s is unmistakable. Incredibly textured atmospheres of soothing grace swirling over a maelstrom of black metal ferocity. Melodies that easily transport a listener into pristine landscapes turn savage and hostile as a flash flood. Emotion runs deep and primal, the band stretching the listener between glory and rage.

Top to bottom the band is so strong. Supported by a flawless rhythm section, it is the guitars that create the lion’s share of the magic. Memorable guitar lines permeate each song, whether in harmony with each other, plucked acoustically, aired out in the ether or bubbling molten rock from below. Track two, “Whisper of the Elements”, is the first standout on the album. With great, deep, recurring and memory-hooking melodic guitar riffs and spectacular scape-building dynamics, the band has maybe never sounded better.

Chris Naughton’s excellent vocals are in perfect form – ferocious, wild and hungry. Winterfylleth again employs their group-style backing vocals across the album, which add so much to create their overall sound – one that rolls nature, legend, serenity, grace, fear, strength, wisdom and brutality into one. Seeming a bit more melodic and dynamic than the previous album perhaps, we hear the band stretching out more toward the graceful side of things. So, it can be said that maybe there is less of the black and more of the atmosphere. Well, that might be so, but what this is, ultimately, is a well-balanced and masterful album.