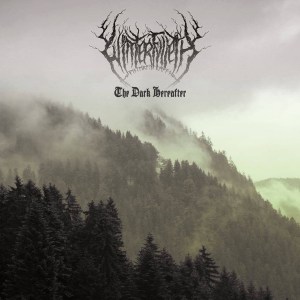 Winterfylleth have been leading the charge for quality British black metal for a few years now and for good reason. Their body of work has established their heritage inspired sound firmly in the extreme musical landscape and The Dark Hereafter is another fine moment in the bands history.

Winterfylleth get right to business with opening cut “The Dark Hereafter”. Eschewing any quiet acoustic bits, the band go right for the throat with their mix of triumphant Hate Forest (or Drudkh) inspired guitar riffs while guitarist/vocalist Chris Naughton lets loose with his upper ranged blackened rasps. The band carry on this note thru the nine minute “Pariah’s Path”, which captures Winterfylleth in a more outright aggressive mood on The Dark Hereafter. Sure, their past few albums have been heavy, but there is an immediacy and almost anger the band hone in on with The Dark Hereafter that finds Winterfylleth tapping into a more standard black metal output (fast drums, sprawling staccato riffs, throat ripping vocals), which I for one found quite enjoyable.

“Green Cathedral” harkens back to the more tried and true Winterfylleth moments with its epic sprawling guitar chords, mid paced groove and moody transitions, creating a densely epic number that really gives the best atmosphere as to what The Dark Hereafter is all about in my opinion. It leaves you with a feeling of solitude and desire to leave this overly busy world behind and escape to the haven of nature and its beauty. “Led Astray in the Forest Dark” is the perfect follow up to “Green Cathedral” and closes the album. Utilizing Gregorian chant style vocals that reminisce of older Ulver the track ties up what “Green Cathedral” began in its somber engagement. Weaving memorable guitar lines midway into the track, “Led Astray..” concludes on a more ‘rocking’ note at the end, fading out it’s rollicking melodies into the dense woods from which it came.

In all Winterfylleth succeed in creating another excellent album with The Dark Hereafter, which will confidently sit side by side with their already consistent discography.