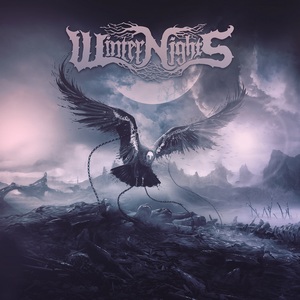 Brooklyn-based Winter Nights released An Endless Apocalypse back in 2014, but we’ve not heard much from them since (outside a single in 2016). This self-titled effort serves as the band’s second full-length of melodic death metal, done in triumphant Scandinavian fashion. If the cover doesn’t give it all away, Winter Nights sits as the darker and more melancholic side of the genre.

There’s a straight-ahead heaviness that Winter Nights benefits from. The tone feels quite dark and bleak, but without being off-putting mind you, and allows the listener to really sink into the experience as a whole. A pleasant level of grit exudes from tracks like “Day the Sun Died,” and gives you an enjoyable throttling. Even though the music is darker, that doesn’t mean it’s devoid of some triumphant and glorious moments. This is where some of the guitar melodies come into play. Closer “Encounters” is a perfect example of this. There’s a driving, almost Amon Amarth-type vibe to it, complete with Jeremy Farfan’s bellowing roars, and the melodies give it a rousing energy. In contrast, the melodies can give things a more somber and sorrowed feeling, such as the elegant solo in “Unmarked Grave.” There’s also no need to worry about the music being bogged down by clean vocals or diving into the poppier side of melodeath – Winter Nights manage to capture a variety of tones and moods within their heavier approach and keep it engaging (and occasionally fist-raising).

Anyone seeking melodic death metal that isn’t afraid of really leaning into the ‘death’ side of things, while still maintaining some epic and somber tones, Winter Nights should be next on your ‘need to check out’ list. Frost-bitten and glorious in just the right percentages.