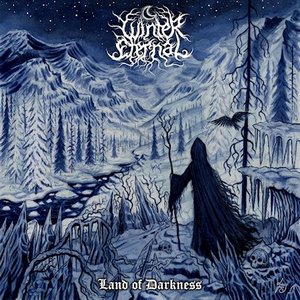 When you get an album with the name Land of Darkness by an artist called “Winter Eternal” which is made up of a single member by the moniker “Soulreaper”, you get a distinct image of what awaits you musically. Coupled with the icy blue cover art, it becomes even clearer that we’re looking at mid-90s Scandinavian metal worship.

Indeed, presented on the album are 9 tracks of decent Dissection/Naglfar worship. Still a far throw from the masters of old, had it been released 25 years ago it would probably have been lauded as a forerunner. In 2021, it merely makes a drop or three in the vast sea of such melodic black acts.

In a way it’s a shame, because this isn’t half bad. Sure some odd choices in the songwriting, such as the shuffling drum and bass intro of the title track or the out of tune strings in the beginning of Crown of Stars (they do become better as the track moves forward) bring it down a few notches. And as with many one man projects the vocals tend to be too loud and not as strong as they could have been with a dedicated vocalist at the helm.

Despite these misgivings, the album will likely find it’s way into the hearts and record collections of many meloblack fans. It’s well produced without being overly so, and everything is clearly audible. The melodies never seem to end, instead weaving into each other and making for an amenable listening experience. And in a track like Faded to Silence where the vocals take on a higher pitch, they sit better in the mix and it all actually comes together.

There is a lot to like about this album that originally threw me off based on the somewhat trite name and title (honestly though, good band names are hard to come by these days). With vocals more in the mix and more memorable hooks, this would have been deserving of higher praise. As it now stands, it’s a well performed but somewhat generic tribute to the style.

This is quite notable when comparing any of the tracks with the Gates of Ishtar cover that sums up the album – the cover track is just on another level when it comes to songwriting and overall cohesiveness. That said, Land of Darkness deserves your attention if you’re a fan of well crafted melodic black/death metal.