Wings Denied – Mirrors for a Prince 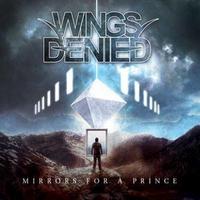 Using the ‘progressive’ label lately seems like such a crapshoot. There is much that falls under the progressive billing and gets used in such a vague and “if nothing else fits” mentality that when a truly progressive band comes along, it’s hard to describe it without feeling a bit cliché. Such is the case for Wings Denied on their album, Mirrors for a Prince. Progressive in the best use of the term, the band takes influences from across the years to turn about an interesting hybrid of all things “progressive.”

Tallying influences from a diverse playing field, the way Wings Denied weaves different elements into their sound is their greatest advantage. Going from Rush to Meshuggah to Porcupine Tree to Periphery to Deftones, there is much to take in with your first few listens. Thankfully, the band recognizes that the progressive label doesn’t have to mean uber-technical and there are plenty of interesting hooks to go along with the djent-y grooves and intricate riffs. Heavier tracks like “Generation Y” and “Clockwork” balance the chugging syncopated riffs with equally compelling melodies and vocal patterns. Speaking of the vocals, they mostly keep to the clean sung variety, with a scream here or there to help enhance a heavier moment, and unlike a number of bands attempting to break into the mainstream with their djent-laced progressive music, they avoid sounding too emo in the process. Lastly, the production is stellar, with Jaime King (Between the Buried and Me) adding the finishing touches to give it a crisp sound.