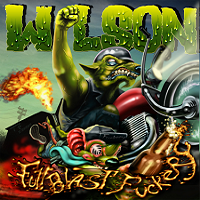 Supposedly a more wild and raucous version of Cancer Bats, Detroit’s Wilson (first thought that comes to mind? Tim Allen’s neighbor on the 90s sitcom Home Improvement) are an unfortunate creation that feels the need to chest-beat their way through their bio and proceed to play quasi pussified hard(er) rock. Positioned as one of those bands that if they lived next door to you, your grass will die (no one will top that Motorhead quote; surprised Wilson didn’t use it), Wilson’s Full Blast Fuckery debut is a veritable walking cliché of wannabe beer rock with arena aspirations.

Competently-played (there’s one positive), but aiming for the wrong target in 2013, Wilson and Full Blast Fuckery aren’t really that different than the heaps of bar-level bands who date chicks who do roller derby, are anti-establishment, but think their work ethic is superior to that of bands with far more intelligent of a presentation, not to mention, better songs. But hey, this stuff is real and DR’s grass is actually dying. That’s what they think.