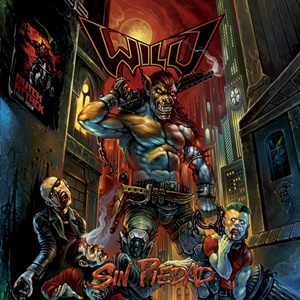 Metal may be predominantly an English-led genre, but we all know the international impact of bands who sing in their native tongue. Active for three years as Majesty Night before becoming Wild since 2004, the band have released a series of EP’s and two previous albums before joining the Fighter Records roster for this third full-length Sin Piedad (English translation: Without Mercy). Certain languages flow well for specific sub-genres – in the case of Wild and their brand of heavy/power metal, their Spanish lyrics flow just as seamlessly next to the majestic hooks, twin guitar-oriented harmony accents, and spirit for leather, chains, and bullet belts abound.

All the requisite elements are in place for Wild to achieve dominance in their chosen field. A potent, multi-octave vocalist who has no trouble ascending to the heavens appears with Jose Garcia – the man can rival Bruce Dickinson, Rob Halford, and even a bit of Michael Kiske during “Circo Virtual” and the highway cruising “Madre Tierra”. A locked and loaded rhythm section who pumps out the low-end grooves while occasionally flashing a bit of their skill sets with brief bouts of adrenalized power, the speedier “Venganza” adept at double kick and tempo shifts in a moment’s notice. And of course, a twin axe attack unfurling catchy rhythms and searing tradeoffs throughout, sure to galvanize the patrons for massive devil horns waving, hair windmill activities- the title track and Judas Priest-like “Bajo un Cielo de Cris” two of the best Wild moments in that department. You’ll also feel a bit of that cultural texture to certain melodies and musical sequences throughout the ten tracks – the band varying their approach across the spectrum from high energy to mid-tempo efforts without missing a beat. And you can’t go wrong with a bad-ass Terminator-like vigilante seeking justice for the cover, can you?

Sin Piedad isn’t going to re-write the traditional/power metal landscape – it’s obvious much like Tierra Santa that these gentlemen have a healthy respect for Iron Maiden, Judas Priest, Accept, and the regular NWOBHM offspring from the 80’s. But its hard not to be impressed with Wild, as they push the correct buttons to carry that flag for good old-fashioned heavy metal.