Whore of Bethlehem – Upon Judas’ Throne (Self Released) 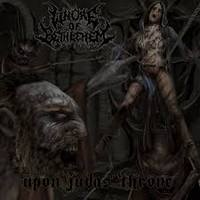 It’s appropriate enough to call this meth metal, either that or we can be modest and call it extremely brutal death metal. Nah, meth metal fits better. It’s a thing and we all know it, some bands just make it more obvious than others. Between savage debauchery and nearly inhuman speediness, above all considering song titles like “Meth Castle,” Texan metallers Whore of Bethlehem flaunt temptations but are sarcastic enough to leave open questions such as actual substance abuse. No matter, there’s no better drug than music and the strain of choice here is pure death metal.

For those of you who dig sick guitar solos, check out the gnarly guitar shredding in “Hideous Resurrection,” composed by the two guitarists Ryan Sylvie and Phil King themselves. “Christ Crusher” is a fervently hateful song swarming with “fallen angels caressed by hate… spawn of Satan annihilate.” All of these detrimental death metal tracks are hateful to some degree. “Leviathan’s Crown” is as sick and blasphemous as the other tracks but the rhyme scheme is what makes it stand out over the others: “Viciously killing he bathes in their sin. Extermination, they cannot win. Permeate horror, fear soaks their skin. Crushed in the clutches of Leviathan.” Twisted religious views always make for noteworthy lyrics.

Backtracking a bit, word on the street (or venues and studios, music talks no matter what) is when the band performs “Castle of Meth,” vocalist James VanDenBerg has been known to “jokingly” ask the crowd if they like meth but usually there’s just this glazed look of confusion on all their faces and dead silence. Obviously, Whore of Bethlehem haven’t roamed in the right (or wrong) regions. Nevertheless, take note that “Castle of Meth” is one of the most exhilarating tracks on the album yet also the most lyrically/thematically out of place in comparison to the others. “Narcotic injection, filth and dejection, junkie suicides, castles built of meth burn the promise of tomorrow.” Meth metal indeed, bursting with drugs, booze, sex and metal, the latter is the only obligation of course, to each their own.

With ten tracks, Upon Judas’ Throne could be longer than thirty-four minutes but that’s what happens when each and every song carries a length between one and four minutes. Fast, furious, ferocious and straight to the point, that’s how Whore of Bethlehem play. Their sounds, tones and temperaments may come off as excessively consistent but they pass and will very likely exceed for executing such terrifically terrorizing, primal, old-school Scandinavian-style death metal. There’s nothing to complain about but plenty to admire.