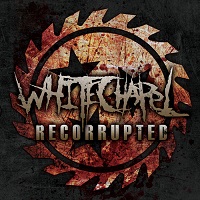 Nothing screams “stopgap” more than a quick five-song EP with one new song, a cover, and a handful of remixes. Rightfully so, Whitechapel’s Recorrupted EP is only available at the band’s merchandise table on tour, the Metal Blade webstore and iTunes, thus making it “limited,” but in the Internet age, that’s a bunch of bullhonkey. These songs probably were up for grabs a month ago.

The sole new song here is “Section 8,” a jam that runs parallel to what the band was doing on last year’s A New Era of Corruption. As such, a healthy portion of chugs and stop-start rhythms are employed to go along with Phil Bozeman’s haggard bark. Dude still is the only thing about the band worth caring about. A rather ho-hum cover of Pantera’s “Strength Beyond Strength” is neutered because of the low-tuning the band uses, while remixes of “Breeding Violence” (by Big Chocolate) and “This is Exile” (by Dillinger Escape Plan’s Ben Weinman) are predictably experimental and uninteresting. An acoustic take on “End of Flesh” is perhaps the EP’s only saving grace, only because it’s a minor miracle a garden-variety deathcore band can sound the slightest bit musical.

Credit Whitechapel and the ever forward-thinking Metal Blade for coming up with something to hawk while the band is on tour. Granted, this doesn’t negate the overall generic and blasé nature of Whitechapel, but collectibles are cool, right?