White Skull – Will of the Strong (Dragonheart Records) 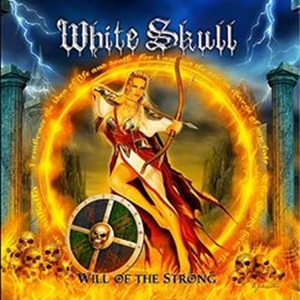 Hitting the tenth studio album plateau, Italian power metal act White Skull have had chances to make their mark in the scene. After putting out two albums on Underground Symphony, their third effort in 1999 Tales from the North came out on Nuclear Blast at a time when the success of Hammerfall and Primal Fear put the style back on the global frontlines. Moving on to Frontiers by 2002’s The Dark Age, the band has had its share of struggles to move out of second/third tier appeal. Stabilizing with Dragonheart Records for over a decade now, Will of the Strong probably won’t shift fence-sitters to become permanent patrons in these twelve tracks, as this bombastic-laden power/heavy metal with a gritter vocal approach contains conventional trademarks that may be stronger in the hands of better known bands.

Flashy arpeggio-oriented lead breaks from Danilo Bar elevate interest, especially on numbers where the epic or cultural riff nature takes over – “Grace O’Malley” an early example for this regard, but he also delivers magnificent, bluesy tastefulness during the front half of the title track break before the double bass power propensity kicks back into gear. Keyboardist Alessandro Muscio gets into the lightning fast heroics for “Lady of Hope” – a song that features some distant Italian language narrative passages beyond the expected big choir choruses and Gamma Ray-like musical hooks. The trouble with consistently airing the record front to back is twofold. The reliance on similar double kick tempos renders most of the fast songs as interchangeable, and the nature of Federica De Boni’s vocals to sit in that gritty spot that could be captivating but just seem lackluster (check out the lower register work in the Native American-tinged “Metal Indian” for the latter weakness). In fact, the best track “Warrior Spirit” succeeds because of the expanded dynamics with Far Eastern acoustic picking and a slower, anthem-like rebel rousing chorus beyond the normal electric proceedings.

Thankfully gravitating away from mirroring Rhapsody or those off-shoots, White Skull are competent musicians who can clearly play- it’s more a question of this deep into their career, developing more diversity in their power metal attack. Will of the Strong probably wins those over who can’t get enough Gamma Ray circa Land of the Free forward, and as such this scribe will be content to air the originators significantly more.