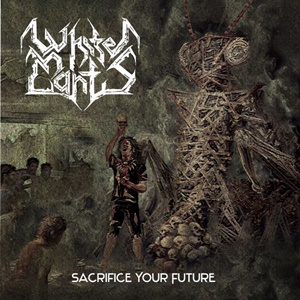 On their Facebook page under the about section, German thrash band White Mantis describe themselves as ‘great for destroying your local disco’ plus ‘killing mutants in a post-apocalyptic death zone’. Alrighty, then – pressing play you know that this four-piece aim to obliterate all comers through a sonic levelling exercise in bulldozing heaviness. Together since 2012 and releasing three demos between 2014-2018, Sacrifice Your Future is the group’s first full-length foray – unleashing ten tracks of power and fury, paying homage to the great acts of the past while also incorporating some diverse nuances of present bands that exorcises any daily demons to extinction.

Semi-blast beats sit alongside buzzsaw guitar maneuvers and this persistent groove to make “Demonic Levity” on first pass a certain standout, the frantic riffing and insane rhythm section switch-ups a thing of beauty – as if Dark Angel and Voivod were tangling against Nuclear Assault musically and vocally. When White Mantis choose to slow down the tempo accelerator to a reasonable highway level of cruise control, the results can be equally captivating – check out the outer galaxy guitar leads floating in and out of the spiderweb licks and double kick foundation for “Ordinary Loser”. Guitarist Matthias Pletz also handles the vocals – and his John Connelly-ish rapid-fire nature coupled with a bit of a punk/hardcore-like angst separates his voice from most in the scene. Occasional use of reverb/delay accentuates key words, while the drum fill bursts galvanize the energy level to bullet train insanity – White Mantis pulling out all the stops to keep the thrash train rolling.

Favorites change daily – the bass solo that starts the tribal-natured “Cavern of the Ancients” a peak moment currently, channeling their inner Slayer here, while the opener “Cannibal State” rips right out of the gate, the infectious riff parade relentless against the speedy word spew and savage screams. They even check off all the cool boxes in terms of a sick logo and cover art that captures what you would expect for content musically. White Mantis remind old-timers of the joys of progressive-laden thrash with crossover aspects – and Sacrifice Your Future should be mandatory for your collection if you need that adrenaline rush in the genre.