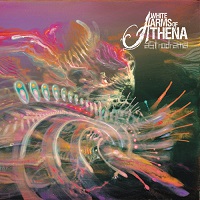 “Amalgam metal” should be the tag applied to everyone these days. Forget us somewhat-intelligent metal journalists coming up tags like, “Frost-bitten folk metal with a urban twist” or “Concrete-addled funk metal with a bite of frost,” it’s all one big amalgam at this point. And that’s fine for those who aren’t straight-shooters, which are what the kids are into anyway. People over the age of 35 probably can’t hang or wish Metal Church was still around. The Dark does rule, though.

Obviously, Texas’s White Arms of Athena fall into the above-mentioned group, with a sound that traverses through post hardcore, progressive death metal, tech metal, and a lot of other similarly-related groups. On their debut outingAstrodrama, the band hasn’t quite figured out how to harness their composite interests, opting to split the album into four parts, which is usually a way to carve things out nicely for the listener, but in this case, it’s an album that is often close to coming apart at the seams.

The band’s sound primarily reeks of modern day Between the Buried And Me, right down to how the riffs fall into place. The opening one-two punch of “Evince” and “Ascend” suggest WAOA have done their BTBAM homework, as jumbled riff segments mash up against heavier, extreme metal moments, which criss-cross with lighter, clean

singing, just like BTBAM. “Creationed” (which opens the second “part”) is easily the best number of lot, with the band focusing in on the band’s brutal tendencies, something the instrumental “Crown Chakra” does as well to mostly enjoyable effect.

With so many ideas and styles being tossed into the blender, young bands

often forget that song is key. On Astrodrama, White Arms of Athena appear to be more concerned with establishing their foothold as superior musicians (they can definitely hang) rather than strong songwriters

. Most of these mistakes happen for bands who are under the age of 35 anyway. Need to listen to more Metal Church.