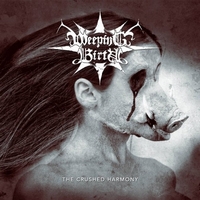 The one-man project – a usual black metal specialty at this point. To the point that it’s not really shocking anybody when it comes through with a press release. But one-man death metal? That’s something you still don’t see too much of. Weeping Birth is the brainchild of Vladimir Cochet, who also is known for the more traditionally black metal band Mirrorthrone. This is the first Weeping Birth output since 2008, and provides some quite suitable brutal death metal with a blackened essence.

Taking a rather multi-faceted approach to a more modern death metal base, The Crushed Harmony offers a bit of something for everyone. There’s some blistering and intense death metal that will find appeal with Hate Eternal fans, mixes it with the brutal and blackened atmosphere of Zyklon, and then combines it with a smattering of technical riffs to keep your attention. There are also some more traditional black metal melodies that sneak their way into the mix (see “Life in a Blood Spasm”) to further add to what Weeping Birth has to offer and keep things from getting “blurry.” All of this is set at a pretty feverish pace from beginning to end, with frequent dips into (programmed?) blasting territory. Lastly, it should be mentioned that the vocals are about what you’d expect, but there’s some pretty serious power behind the mic and they are the kind of thing that will knock you back a bit.

The Crushed Harmony is a real steamroller of a death metal album. It marches relentlessly from beginning to end with little pause, but it’s hard to fault Mr. Cochet when the riffing is so well thought-out. Deathly melodies and a feral tone make this a solid output.