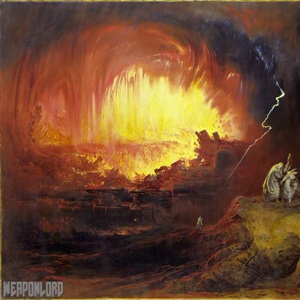 Sites like Bandcamp have been integral to pushing the metal underground above ground today – a fertile talent pool to wade through in the hopes of discovering the future of the genre. Sort of like an advanced version of tape trading during the 1980’s and early 1990’s – thanks to US Power Metal Connection (a Facebook message board group) another recent discovery Weaponlord lands on the review pile. A relative newcomer together a little over a year, this self-titled debut EP showcases a confident power metal sound that tips its influence cap to the 80’s Northwest scene when Metal Church, Fifth Angel, Sanctuary and Heir Apparent gained decent press coverage and critical acclaim, especially overseas.

A lot of the guitar foundation and attitude spits forth New Wave of British Heavy Metal spirit – the energy, melodies, and up tempo drumming for “Witch Hunt” pump out those accelerated spider web runs and twin harmonies that excite, delight, and bring out the denim and leather hordes by the droves. “Global Insanity” contains the most thrash-oriented riffing (the main one very Forbidden-ish), although the vocals of Bison Longshot appear to be more in the Brian Ross (Satan) meets Bruce Dickinson range which keeps Weaponlord firm in their power/traditional output. Closer “Dagon” has some killer twin axe harmonies and a fervent semi-gallop nature to the arrangement that allows Bison’s soaring propensity to shine, the neo-classical bass and lead play mesmerizing in a Thundersteel-period Riot manner. It’s as if the quintet has done their musical homework – siphoning off the best of the American power legends while also embracing a bit of the European revival in terms of finesse and execution.

My only disappointment lies in the fact that two of the six tracks are shorter interlude/intro affairs, meaning you get four songs that feel like a short film teaser when- in reality- tremendous output such as this deserves a full-length treatment. Weaponlord wield all the requisite tools to become power metal superstars – it’s only a question now of keeping the songwriting / hunger curve on a similar upward slant.