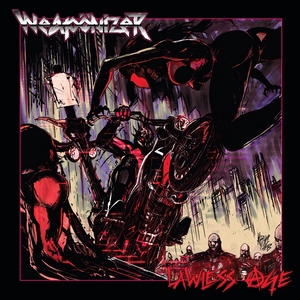 Doesn’t take much more than a glance at the cover art for Weaponizer’s second album for the unfamiliar to realize that this band is heading back towards the ‘80s with their sound. Taking the aggression and straight-for-the-throat attitude of ‘80s thrash metal and combining it with a more blackened and extreme approach suits this band just fine.

As already alluded to, Lawless Age is an album that is all about vicious riffing. No one is going to rave about the uber-tech stylings, but plenty should find a riff or two within each track to get the blood pumping. In fact, there’s really no let-up from the riff machine. That’s far from a negative though, as there’s plenty of character to back everything up as well as the blackened atmosphere at times, which keeps things interesting. Some vintage Slayer and Sodom feelings to the whole thing, and tracks like “Vulture” and “Iron Clan Exiles” are bound to induce sore necks from frantic headbanging. When the band really steps on gas pedal for a few moments, this is where the blackened elements tend to stand out. “Hellbound” is an early example of this, but the later “Gangrene” employs similar blast beat attacks that emit some rather dark tones. Of course, the leads are where some of the melody comes in and slower ones like in “Rattenkrieg” really showcase what the band can do without compromising the assault. Lastly, the vocals stick to the barked shouting that you’d expect but it works within the context of the music.

If you are in need of something to vent some rage in an old school manner, Weaponizer is a great starting point. Lawless Age may not be revolutionary, but it’s a well-made and enjoyable trip that merges the old school with a more extreme sound that many should have no trouble eating up.