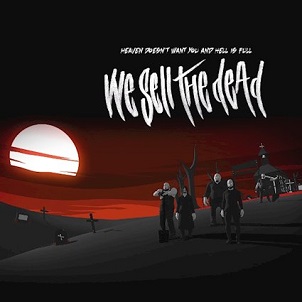 We Sell the Dead is a supergroup, so pardon the collective yawn that generally emanates regarding such a formation. Featuring guitarist Niclas Engelin (In Flames, Engel), bassist Jonas Slättung (Drömriket), drummer Gas Lipstick (ex-HIM) and vocalist Apollo Papathanasio (Spiritual Beggars, ex-Firewind), We Sell the Dead, thankfully, sound nothing like any of the aforementioned bands. Rather, and quite interestingly so, the band comes together in a sort of balls and chunk, upfront and “there” melodic metal fashion, making their Heaven Doesn’t Want You and Hell is Full debut a worthy effort.

Conceptually based around Jack the Ripper and his nefarious deeds, We Sell the Dead also takes the reach and ponders how a metal band would sound in the 19th century or, “if Jack the Ripper traveled forward in time to join a metal band.” While that’s a bit of a reach to even ponder, these songs cut right on through, no doubt helped by Papathanasio, who remains the best singer Firewind ever had. He’s got a classy enough of a vibrato to carry home Engelin’s teaming melodies, especially on the chorus of “Echoes of an Ugly Past” or the biting “Turn it Over.”

Don’t sleep on the song-oriented nature of this, a pretty obvious component when you dig into “Leave Me Alone” and “Pale Perfect,” which almost place We Sell the Dead into pop metal territory, but probably shouldn’t go there considering it’s a space perilously occupied by In Flames at the moment. But, remove all doubt, get on with these tunes — We Sell the Dead have turned in a healthy, agile batch of songs on Heaven Doesn’t Want You and Hell is Full. A supergroup done right, alas.