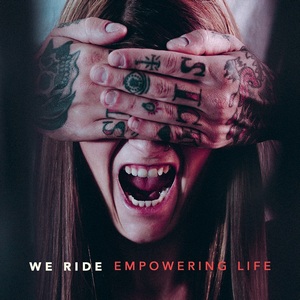 Perhaps it was the introduction of metalcore, but material that was truly hardcore in the US seemed to die down a bit over the last decade or so. Granted, some big names and veterans still persist, along with occasional fresh and peppy upstarts, but it doesn’t seem to garner the same level of attention that it used to ‘back in the day.’ That doesn’t stop Spanish hardcore act We Ride from giving it their best attempt on Empowering Life.

Not a throwback by any means, We Ride do carry some of that angst and spitfire that seems to be less worn territory lately. It does help them out in this regard, as it should gather them some added attention. That standby punk/hardcore gallop comprising a great deal of their sound, with the band frequently hitting the full throttle approach, with vocalist Mimi Telmo’s shouts heaving the appropriate level of acid. Occasionally, the act moves into more melodic territory (thankfully without too many clean vocals), settling into some groove and breakdown-ish territory on “Do It All Again” and “Summer,” for instance. The two potential setbacks are minimal but worth mentioning – the first being that the guitars could use a little more bite. A thicker sound could make this sound rather heavy at times (in the best way possible). The second being that the band too often settles into the same tempo, which makes some of the songs fail to differentiate from each other. It doesn’t break the rules that way, but it seems like there’s more potential here below the surface.

Those in the mood for some metallic hardcore/punk should get a few kicks out of We Ride. It plays things pretty straight for the most part, which makes it enjoyable, but fails to make it stand out quite as far as it possibly could. Perhaps with future releases.