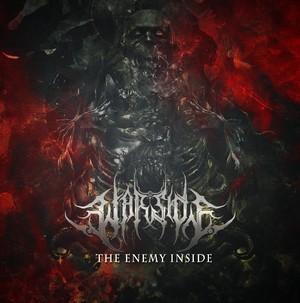 French death metal act Warside bring out their first release in the form of this explosive, 20-minute release The Enemy Inside. Full throttle death metal is something best doled out in a short span of time, which makes this a perfect introduction to this band. The Enemy Inside is full of furious rage, and keeps things moving to keep listeners pleased.

Warside’s approach is on the more modern side of things, with Aborted being the first name to really come to mind when hearing it. But instead of leaning into more groovy material like Aborted has done in more recent times, Warside want to simply pulverize at high tempos. The songs are chockful of blastbeats and riffs that swirl around the listener as fast as they can. It exudes that burst of adrenaline that you would expect in that regard – The Kennedy Veil comes to mind here as well. The riffing isn’t hyper technical, but it’s interesting enough that the band can continue to barrage you with the scorching tempos without it becoming boring. This is also in part because of the short run time and that the songs themselves hit that 3-4 minute sweet spot and leave out the extras in attempt to jump right into the good stuff.

Short, sweet, and full of cuts that will fuel your inner rage, The Enemy Inside leaves a strong first impression for Warside. Those that enjoy modern death metal that likes to frequent high energy and urgent tempos would be well advised to check this one out. Warside have the blistering, caustic side of death metal down pat with only one release to their name.