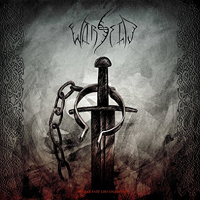 For fledgling bands, an EP is typically the right way to go in terms of a first release. Instead of blowing off the top with a full-length that chances are, no one will want to sit through (save for friends and family

…if they’re lucky), an EP provides enough of a taste-test for the designated audience to get a feel for what’s in store. Plus, it affords young and/or unsigned bands to put their best four or five songs to tape, thus increasing chances of discovery…or limiting opportunities for thorough embarrassment.

In the case of Madison, Wisconsin’s black metal brigade Warseid (pronounced “war-sede”), a four-year honing and tinkering process was employed prior to the release of their debut EP, Where Fate Lies Unbound. This ultimately served the band well, for there’s an understated, yet noticeable sense of maturity to the EP’s four songs. By this, there’s a noticeable dearth of unnecessary detours or wanking, tactics that young bands typically employ because they’re insecure, or in dire need of attention. With Warseid, their smattering of Euro-tinged Gothic black metal (think Cradle of Filth when they’re not messing around) and progressive death metal ends up being a more expansive mish-mash than meets the eye. Spanish-tinged guitars aid “Frost Upon the Embers,” while “The Vengeance Pact” benefits greatly from some well-placed acoustic guitars, making it the album’s shining moment. Even some clean singing makes an appearance on “Farewell,” giving substance to the band’s versatility.

Once the band rounds up a proper production job (read: this thing is clicky and processed), the ball should be rolling rather swiftly. Where Fate Lies Unbound offers an ample teaser as to what Warseid is capable of, all the while setting them up nicely for a full-length should a small independent want to take a chance on an American black metal band that plays live, has technical prowess, and can slap together a quality tune. A novel concept.