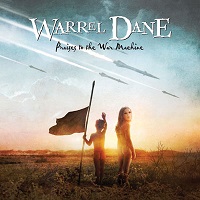 Essentially “Nevermore-light,” which for all intents and purposes would be their first, self-titled album, Praises to the War Machine bears the unmistakable mark of one of metal’s last true voices, Warrel Dane. Very much a metal album without the trim and fillings that usually come with a Nevermore record, Dane’s first solo album is consistent all the way through, as Dane’s menacing low register makes this 12-song affair an absolute winner.

Surrounded by a couple key names in the scene: ex-Soilwork guitarist Peter Wichers, who handled production duties, drummer Dirk Verbeuren (also of Soilwork) and former Himsa axeman Matt Wicklund, Praises to the War Machine maintains a steady ebb and flow, allowing for Dane to stretch in the confines of basic 4/4 songs. The riffs are simple, but stay away from any sort of block-headeness that would dilute the songs at hand.

Big, seismic grooves characterize “Messenger,” which also has soft, flowing chorus, while “Obey” follows suit, with Dane benefiting from some striking dynamics throughout.

The more restrained, thoughtful material such as “Let You Down,” “Brother,” and the excellent “Your Chosen Misery” rank as the real highlights. Dane’s work on similar Nevermore songs (i.e. “Cenotaph” and “Matricide”) were always stunning displays of the band’s emotional range, so it is no surprise both songs shine here.

Praises to the War Machine reeks of good taste, depth, and above all else, tightly-wound compositions that ooze dynamics both in the vocal department, but also musically as well. It will be interesting to see where Nevermore goes next, given the lack of staying power This Godless Endeavor had, but Dane should take comfort in knowing that after years of being one of metal’s most imitable frontmen, he can make it on his own.