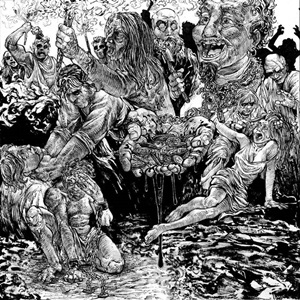 Witnessing this CT quartet Warm in live quarters opening for Vektor during the winter seemed quite appropriate (snowstorms and arctic winds poured through earlier that day) – and finally getting to take in this full-length album ignites my fire for the group’s sound again. The Human Exemplar is an 8 track, 35-minute odyssey into the realms of doom, sludge, and post-metal – all given an experimental yin and yang balance as the chemistry between vocals and music hypnotizes and elevates everything to outer dimensions.

Keying in on particular dark, brooding chord combinations and then building upon them up, down and sideways through Ryan Kelly’s progressive bass plucking and drumming from Shane Oakes that contains Tool meets Baroness flow, “Ash in the Waves” and the follow up “The Imperative” set a course for heaviness times one thousand. Guitarist Mike Taylor as well as axe man Keenan O’Connor dole out sick rhythm foundations and bluesy lead breaks that 70’s masters like Iommi or Blackmore envision – if put through a Mastodon/Crowbar-ish template, as the lumbering swing fist “Of Air” perfectly illustrates. Mike has a duality to his vocals – occasionally much harsher and apocalyptic, but has that melodic quality to his measured words, and can use both to hit a sweet harmonization when called for.

The post-metal aspects come up during methodical opening or instrumental sequences – the 2:56 “In Language” for instance consists of drawn out guitar lines that ruminate as if taking in a funeral passage. Another stellar example of killer off-time drum tempos occurs on the closing title track, building the tension as the bass, guitar, and spoken word parts swirl around your headspace – before transforming into this tranquil, quasi-ballad with acoustic supplementation to the normal electric proceedings. Black Sabbath and Lynyrd Skynyrd would beam at the influence of musical chemistry on this particular cut – one of my favorites.

Warm are a tough band to categorize – which best serves them for a wide-open audience to pull from. The Human Exemplar succeeds because the ideas are expansive enough to grasp in a fresh perspective through multiple playbacks – yet never meander beyond appropriate time constructs. Well done, gentlemen – dish out delectable jams like this more and you’ll gain fervent followers every time.