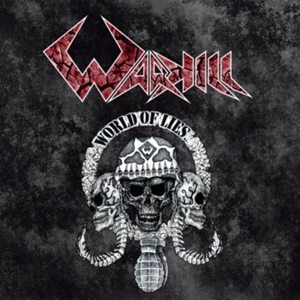 Another stumble upon Bandcamp discovery, Warkill are a trio of musicians from Mexico that have been together since 2014 and finally released their debut EP World of Lies. It’s comforting to know that the group took their time in developing this material, because many new bands feel the need to immediately get a recording out to the market before really developing a sound that has substance beyond obvious influence points. After a few passes these four songs sit firmly in the thrash platform, but also contain a few traditional and death aspects to diversify the outlook into something a bit broader than expected.

The riffing and structures possess an intertwining of the American finesse with European sophistication at times – Warkill aren’t necessarily going to be the flashiest or fastest act in thrash, instead preferring to take a stronger main riff and build around it through melodic/heavy jump off points to accentuate the arrangement as a whole. “Total Extinction” is the best example, a clean opening and conclusion differs from the Kreator-ish mid-tempo heaviness through the crux of the verses and chorus. The marching off to war atmosphere for “Return to Dust” with its triplet snare hits at times definitely brings the early Bay Area movement to the forefront – although guitarist Abraham Hernández has a rhythmic, raspy nature that mirrors the riffs at hand, and the blast beat during the lead break differentiates from a normal ‘thrash’ approach. You can tell these gentlemen like their Maiden/Priest hooks just as easily as their thrash/death influences – which improves the retention process compared to other artists that aren’t conscious of embedding those nuances into their songwriting.

Because this is a quick effort (the four cuts clock in under 19 minutes), the brevity improves Warkill’s chances for appeal – leaving the listeners wanting more rather than exhausting their initial impressions. This is a decent start for a trio different than the conventional Slayer/Exodus/Testament hordes – so check it out if you want a bit more gallop or sophistication at mid-tempo paces in your thrash diet.