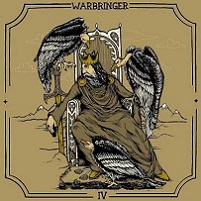 To be frank, always found these guys to be more of the thrash problem than the solution, with their white high-tops, unfocused/generic songs, and lyrical clichés. They’re hard-working gents, that’s for sure, as their tour schedule would make even the most experienced outfit creak at the knees, but their recorded output has, to these ears, been on the “meh” side. However, IV: Empires Collapse has pushed the dial in the positive direction, with a noticeable toning-down of those overused thrash “ideals” in lieu of a straightforward attack that snarls and impresses with melodic dalliances.

This uptick in quality may or may not be attributed to new members Jeff Potts and Ben Mottsmen (two dudes this scribe ran with in the drab Pittsburgh metal scene), or just the need to get out of the polka beat warzone. Regardless of what happened behind the scenes, Warbringer has developed a dastardly opening trio with a biting thrash opener in the form of “Horizon,” a grinding crossover foray with “The Turning of the Gears,” and pogo-ready jam by way of “One Dimension.” The three could be considered some of the band’s most mature and refined numbers to date, especially “Horizon,” which is leaps and bounds ahead of what they were doing around 2008.

The frenzied, shout-along “Iron City” is an obvious nod to the “shitty beer” that so many Yinzers are fond of (not DR, though), while the mid-tempo build of “Leviathan” is a near-brave detour away from the ground-and-pound approach, with fluid guitar shades and even a bit of a doom lurch. Interesting. And while IV: Empires Collapse might not be a complete overhaul, it shows that Warbringer are aware that in order to stay afloat, they had to get out of the retro thrash game. They have one giant boot out the door with this. Here’s to getting all the way out with album #5.