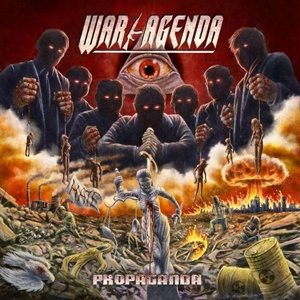 The second album Propaganda from German thrash band War Agenda comes with some lineup changes. Understandable given the five-year break after their Night of Disaster debut – but fear does set in when a new voice handles the microphone, especially in a genre that is known for energy, speed, power, and aggression. Intertwining a mix of US influences from both the East and West Coast along with some semi-technical precision, it’s always interesting to see how a unit develops through the years along with new components in terms of band chemistry and output.

As guitarists Inges Khan and new axe man Raafat Al Atasi volley off of each other seamlessly, filling the aural landscape with a mix of crunchy rhythms, melodic and tasty lead breaks, plus the occasional spirited accent or harmony aspect to build anticipation for the next measure or transition. Check out their work in “Human Race” as they go from a clean, serene Forbidden-ish set up into crunchier, headbanging fare – walls of destruction in a mid-tempo Exodus meets Anthrax pounding manner. The introductory bass work of Marcel sets up a tribal-like drum pattern for Hamdi to execute on “Silence of Justice”, another solid track that features some impressive arpeggio-oriented sweeps and an interesting, calmer to semi-progressive twist towards the back half of the arrangement. The quintet occasionally can galvanize the double kick tempo and serve up some ripping speed parts – as you’ll get through the title track – but it seems like they prefer to explore the crevices of more mid-tempo metal / anthem-oriented arrangements. The current vocal style of Moustafa Ali has a very unique snarl that is almost sarcastic in tone, occasionally adding in some whispered or more talk/narrative dynamics to keep the proceedings very rhythmic and aligned to the atmosphere of the music on hand. Which works well on the old Exodus-ish “Chaos Invasion” that features another pumping propulsive bass segment against a bevy of slicing rhythms, but some will wish for a bit smoother delivery on “Plan B” where the music requires possibly something a touch more melodic. By the time the shapeshifting ballad to aggressive “Child of Dreams” rolls through in see saw fashion to conclude things, most will probably be left satisfied and not exhausted at the appropriate 45-minute playback.

War Agenda are another act in the thrash field that is melodic, semi-progressive, and aiming to deliver solid hooks from a guitar and tempo standpoint. Most will enjoy Propaganda and some will be challenged by the left-field vocals – but if you can handle Zetro or Sean Killian, it won’t be a major issue for most.