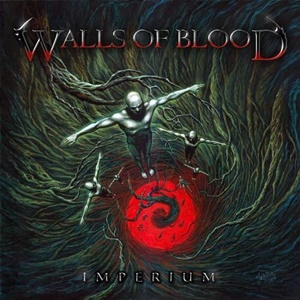 A project album where veteran guitarist Glen Drover (ex-Megadeth, ex-King Diamond) enlisted the help of some premiere metal vocalists to flesh out his songwriting ideas (co-writes with Glen’s brother Shawn on lyrics), Walls of Blood with Imperium has been years in the making. The slow and steady progress came down to availability, and as a result we have in our hands a ten-track effort consisting of nine originals plus an Alice in Chains cover of “Junkhead” from their incredible Dirt album. Other contributions came from ex-Fates Warning bassist Joe DiBiase, bassist Chris Myles, and drummer Scott Barrymore – while eight vocalists tackle the variety of power, progressive, and groove-oriented metal efforts that Glen composed.

Marrying Glen’s robust riffs and penchant for keeping a heavy tone to the proceedings to the vocalist on hand is key – he’s obviously going to give a heavier track like “Waiting to Die” to Testament’s Chuck Billy while allowing a power/traditional sounding “Tarnished Dream” a perfect compliment to the soaring falsetto edge Tim ‘Ripper’ Owens reigns supreme in. Ex-Metalium/current Firewind singer Henning Basse gets three songs to showcase his skills, from the double kick power driven “Blood Sacrifice Ritual” and a lower, crunchier anthem like “The Fault of Man” that makes for an intriguing Nevermore-like atmosphere as standouts. Striker’s Dan Cleary and Pagan Mind’s Nils K. Rue also excel – but most will be appeased to hear Queensryche’s Todd La Torre handling the soaring melodies during the progressive “Discordia”. Glen definitely knows his way around a fretboard during the lead breaks – tempering his shred skills with sensible phrasing and adherence to the feel and mood of the arrangement at hand. “Junkhead” features Texas native Lance Harvill, baring quite a similar resemblance to Layne Staley while the music keeps that same dark ambiance that made AIC stars of the 90’s.

Imperium succeeds in a world where project albums often fail because of the distance factor where it’s like assembling a jigsaw puzzle that struggles to come together – the pieces are there, but it lacks clarity and cohesion. Walls of Blood on the other hand showcases Glen’s guitar playing and strong songwriting skills, to deliver an awesome front to back effort for those who love melodic power, progressive, and darker groove-oriented metal.

Walls of Blood – Descension to Ascension