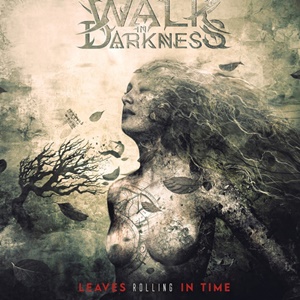 Steady in development through a series of independent album releases, Italian band Walk in Darkness signed with Beyond the Storm Productions in 2021 as their first three studio records received reissue treatment. Which set up this fourth full-length Leaves Rolling in Time, choosing to look at the world from the edge of an abyss, where humanity struggles to make sense of the ruins, constantly evolving technology, and the loss of civilization as we know it. The eight songs in main (the ninth a Shaman version of “No Oxygen in the West” that appears earlier on the record) traverse a landscape of gothic, symphonic, and extreme metal measures – diverse in approach, providing atmospheric and emotional touches that ensure a journey on multiple levels to the good.

These musicians know how to balance out serene, thoughtful parts with that added distortion/heavy depth that allows specific guitar passages or emotive melodies to shine – beyond the normal aggressive or darker nuances. Early on for the record, the title track resonates through a solid musical/vocal hook during the verse to chorus transitions, male growls going toe to toe with Nicoletta Rosellini’s alluring clean delivery. The gothic platform is the major base that Walk in Darkness catapult the little details into broader strokes – arpeggio runs plus energetic guitar/keyboard syncopation giving “Bent by Storm and Dreams” a waterfall, cascading-like feel, even as the closing, quieter drum parts vanish. Shaman’s guitar layers possess this bristling sense of cultural compassion, swaying back and forth from lighter, melodic engagement to progressive, semi-aggressive pulsation – allowing “No Oxygen in the West” to display circular intensity, while the follow-up “The Last Glow of Day” evokes older alternative meets modern/electronic aspects, the deliberate drumming as well as male vocal effects a dynamic contrast to Nicoletta’s majestic vocal presence. Acoustic guitars, choir parts, guest violin work all exist to enhance the natural abilities of the trio – with influences that come across from acts like Paradise Lost to Tristiana, Flowing Tears to Sirenia.

Leaves Rolling in Time puts Walk in Darkness in a musical landscape where they can capture a multitude of gothic/symphonic metal followers who want material that touches mind, body, and soul with that extra attention to detail that tug at all the right emotions. 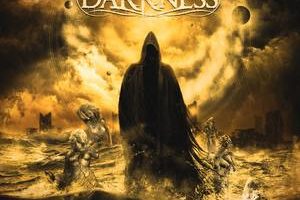