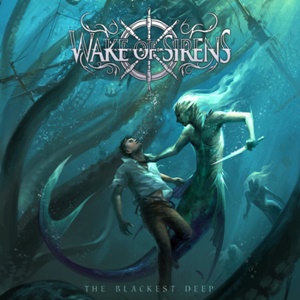 Sometimes bands and projects take years behind the scenes to develop into what the listener finally hears upon release. Case in point – Massachusetts band Wake of Sirens and their debut album The Blackest Deep. Originally recorded in 2015, only keyboardist/vocalist Hadrian Ironside (Alex Newton) remains in the current lineup – but the players within deliver an interesting cocktail of power, progressive, and folk metal influences, taking into account a mixture of guitars, keyboards, and spots of trumpet and cello use beyond the narrative and soundscape elements that provide a full aural experience.

Intertwining a love of seafaring, adventure, and historical/folklore themes for the lyrical content – the music also has a similar wide array approach explored track to track. Songs like “Prevail” for instance contain folk-like strains, power metal riffing, and extreme accents from occasional growls vocally to semi-blasting drum measures, signaling waves of anticipation for the listener as to what comes next because the track contains enough progressive mood shifts that you don’t even feel it’s taking up almost seven minutes of your time. The layer of vocals from Alex and keyboardist/drummer Aaron Maloney transfix towards an almost semi-chant delivery, and the tender piano touches against the cello make “Until You Slip Away” another highlight, the ‘I’ll find a way’ refrain barely keeping this away from an instrumental that encapsulates Savatage and Avantasia as one. The cultural and hypnotic/darker edges come out in “Owned by the Ocean” – female and male vocals matching the swirling, epic riffs a la Primordial, while the clean chorus has a bit more of a Ensiferum nature to it. Saving the longest cut “Cape Evans” at over ten-minutes for the closer, this track illustrates all of the progressive chops present – another moving arrangement that builds from its softer verses into a treasure trove of guitar / keyboard activities, combining everything from Symphony X and Gamma Ray to Avantasia once again as Dan Wise delivers very emotive rhythm and lead guitar work during the final instrumental segment.

With members now in the group from other notable New England bands like Vivisepulture and Ice Giant, Wake of Sirens are special because of their willingness to take a diverse set of sub-genres and make them sound seamless and exciting together. A solid debut record that will be intriguing to watch develop with subsequent releases.