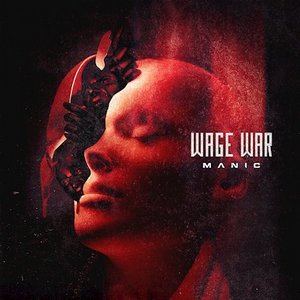 What’s the key to being successful in metalcore nowadays?  For one, stop aping the ‘classics’ provided to us by bands like Killswitch, Unearth, and the like.  Two, put a diverse spin on things, so that the clichéd archetypical songwriting never feels that way.  Both of these are handled quite well by Wage War with their latest album, Manic.  An album that has the metalcore stamp, but avoids running into clichéd and overdone territory.

Manic’s greatest strength is its diversity in songwriting.  Wage War can flex some seriously heavy muscles when they need to, but it’s the other aspects that keep the band truly interesting.  Opener “Relapse” begins with some light industrial feelings to it, before the riffing interjects and provides an electronic and melodic side to things.  It’s modern sounding, and when you think it’s going to continue down that same path, the music takes a heavier turn.  “Teeth” effectively blurs industrial and metalcore grooves into a crunchy and surprisingly hypnotic feeling, coupled by a catchy chorus that effectively avoids sounding trite or over the top.  The title track is where things start to get more interesting, with some near trap-sounding beats going on – there’s a dark quality to it that makes the heavier chorus a bit grittier and pulsating.  Later cut “Death Roll” has a more purely metallic feel to it, with devastating grooves that hit right in the chest.  There’s a more melodic side to the act too which frequently appears, and even the most melodic cut (“Never Said Goodbye”) manages to strike a more genuine chord that many ballad-y numbers of the same ilk, due to some poignant lyrics and a strong vocal delivery.  Likewise, the otherwise frenetic “Tomorrow Never Comes” closes the album off with some visceral energy, but also an impressively soaring chorus that serves as a nice triumphant salute before the finish.

Wage War have all of their melodic and heavy ducks in a row with Manic.  There’s some exploratory territory, and their use of electronic and industrial elements to augment their metalcore delivery helps to ensure that the album has the right heavy/catchy flow but with a fresh coat of paint on it too.