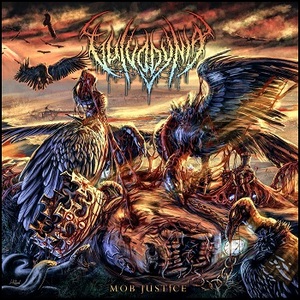 Back in 2016, Vulvodynia went just about as far into slam/brutal death metal as one could go. Psychosadistic Design was a monstrous release – one that didn’t really advance the genre, but it did everything it needed to the right way. Ultra brutal riffs, vocals, lyrics, you name it. Best of all, there were none of the usual after-effects that make those kind of albums get old quick. In a bit of a surprising move, the band has in fact advanced their sound in certain ways with Mob Justice, and makes it an album more distinctive and enjoyable in every way.

To get it out of the way first, slam purists may not like some of the directions that the band has gone it. If you are looking for over-the-top slam/death/gore action, there’s definitely some here, but it has been diluted by some other things. Perhaps diluted isn’t the strongest word of choice, because there’s nothing watered-down about how vicious yet memorable Mob Justice is. All changes have been made for the better, and from start to finish there is something to pick out. While some sections stand out as just as malevolent as in the past, there’s more of a traditional death metal structure that has been added in along with some of the deathcore-esque directness and slam riffing. Atmosphere and solos hit the spot, and the band never lacks for grooves. Most importantly on the groove end is how pummeling yet catchy they manage to be, like the destructive energy of “Famine” or “Cultural Misogyny.”

Vocally, things can be just as gurgle-y as ever when needed, but there’s a much larger emphasis with enunciation (which adds to the wide range on tracks like “Blood Diamond”). Along with this is the shift from extreme gore in the lyrics into some ‘truth is scarier than fiction’ tales from their homeland of South Africa. It’s also worth noting the guest vocalists here too, as they add some different flavors, such as the injection of hardcore-esque abrasion on “Born into Filth” with Alex Taylor and the slightly silly yet groovy frog croaks of “Nyaope” from Martin Matousek that take the song into serious slam territory. To finish up with the production, it’s rather burly, but crisp and clear where it counts – from a melodic solo to a bit of rumbling bass, it will jar you but not disorient you.

Mob Justice is still slam-infested to the point that it probably won’t convince the naysayers, but the tweaks in their approach make it rather impressive to those wanting a bit more from the genre. What it has lost in over-the-top extremity it makes up for with a tight-knit death metal composition that still has more than enough power to leave a trail of destruction behind it. Which makes it addictive and simply fun to listen to at the same time. A surprising leap forward that won’t abandon fans in its wake. 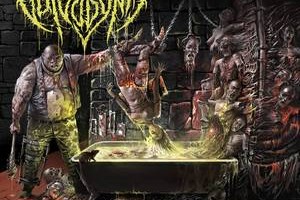