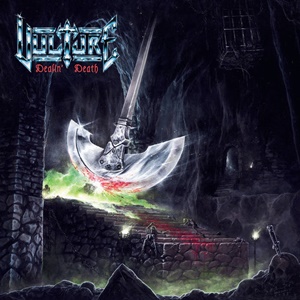 Natural assessing one’s discography should be an asset in creating the best studio records as musicians gain more seasoning and experience. Vulture established themselves as a fierce speed/thrash entity on their 2017 debut album The Guillotine, getting a little more complex in atmosphere and structure for the follow-up Ghastly Waves & Battered Graves. Always sprinkling in a healthy serving of traditional influences from the 80’s, Dealin’ Death sees the five-piece dial into more straightforward heavy hooks while also conjuring up that horror/evil vibe that distinguishes them from the retro pack.

Staples such as the reverb enhanced wild shrieks and screams courtesy of the metal to the bone range of Leo Steeler and heads down speed riffing against mid-tempo melodic catchy moments from the axe team of Stefan Castevet and Mattes Outlaw make songs like “Count Your Blessings” and “Flee the Phantom” early standouts. Smaller fade in aspects or darker synth sequences add that extra level of anticipation in a horror soundtrack way for “Below the Mausoleum” and “Multitudes of Terror” – the latter featuring restrained clean and touching lead break work before driving the tempo into upper gear Destruction-like insanity. These musicians aren’t oblivious to diversity – the jazzy piano sequence during “Gorgon” quite exhilarating to set up the subsequent progressive-oriented musical proceedings, the feel of this track taking on a bit of Mercyful Fate-ish charm while the background gang vocals volleying about for possible audience enhancement when aired in a live setting. And it’s a welcome sign to have bassist Andreas Axetinctör pump up the proceedings in spots where he doesn’t just play root notes but supplements the groove and intricacies as closing anthem “The Court of Caligula” illustrates.

Sharp as the blade that penetrates the cover, Dealin’ Death will go down a storm for the Vulture faithful – and should bring more into the fold that want a reliable force for the current German speed/thrash scene.