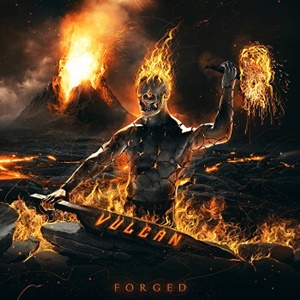 An upstate New York act from the Buffalo area, Vulcan release a potent blend of groove-inspired thrash with death and semi-modern influences on their first full-length Forged. Not much background information to go on – but that’s okay as the focus should always be firmly placed on listening to the songs and absorb the content. The five-piece hammer home eight tracks that feature strong rhythm mechanics, evil mixtures of screams and growls vocally, and this undeniable sense of groove that comes organically, along with twisted transitions that can set the brain to stun mode.

The venomous rasp and feverish delivery emanating from vocalist Eric Budash has a mixture of Phil Anselmo and Randy Blythe at the forefront – occasionally rearing back for death growl capacity on the mid-tempo twister “Set It Loose…And Wait”, the repetitive chorus giving the song more girth. As guitarists Casey Vetter and Petyr Alorik inject very tasteful melodic sections and circular themes against their normal riffing that dances between thrash and groove metal – check out the twin machine gun steadiness for “Deeper into the Spiral” and see if you can deny the inevitable head swiveling that propels the arrangement. Its as if the band intertwine aspects of the modern scene a la The Black Dahlia Murder or Trivium while also keeping things in the groove/thrash mold a la Crowbar meets Warbringer – and that add that slight traditional aspect to spice up the mix. You can prepare for jumpy parts in “Acrimonious Empathy” that soon give chase to progressive tempo changes, the line of the album ‘glass shards of empathy force fed into me’ reverberates as if the dream becomes reality from the viewpoint of its narrative. The fire-laden cover scene matches the proceedings adequately – as the occasional blast beat/frantic nature during “Chained to My Cycle” another adrenaline elevation to keep Vulcan on your toes while the death/doom switch-up offers a dynamic breather.

Not even clipping 29 minutes, Forged should find favor in many groove, thrash, and semi-death record collections. And hopefully establish Vulcan as a band to be reckoned with not only for Buffalo, but the globe.