Voyager – The Meaning of I (Sensory Records) 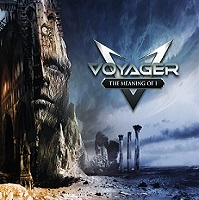 Australia as a remote country certainly has produced its fair share of unique bands in the metal genre through the years, and believe it or not has quite a potent power/progressive metal scene. Names like Vanishing Point, Pegazus, and Black Majesty have gained worldwide deals and done abroadfestival

/ tour work to push their sounds to wider audiences. Voyager are another progressive metal quintet from Western Australia building a buzz with their previous three full-lengths, setting the stage for their new deal with US label Sensory Records on their fourth album The Meaning of I.

To describe Voyager’s multi-layered sound is quite challenging. Sometimes the keyboards have this 80’s electronic pop sheen such as the ones throughout “Broken,” while the guitar

work from Simone Dow and Scott Kay runs the gamut from Soilwork heaviness to Amorphi- meets-Nightwish atmospheric bliss. The rhythm section of bassist Alex Canion and drummer Mark Boeijen certainly holds the bulk of the progressive motion, throwing down subtle tempo shifts from all degrees of speed and grabbing your ears with the wow factor on cuts like “Stare Into the Night” and the closing juggernaut “Are You Shaded?”

Vocalist/keyboardist Daniel Estrin separates Voyager from the pack with his comfortable ethereal melodies, once again very soothing and catchy with a bit of that Scandinavian pop sensibility; the A-Ha comparisons justified when you take in winning tracks like “Pensive Disarray” and the more straightforward power number “Fire Of Times.” Recently wowing the Progpower USA audience in Atlanta this past September, you get the sense that Voyager could slowly make inroads much like Evergrey did a decade before in terms of their metal blend and charming songwriting.

2009’s I Am the ReVolution to me is still the pinnacle Voyager effort, but The Meaning of I possesses the better production and isn’t too shabby in terms of offering plenty of riffs, hooks and ingenuity for your hard earned cash. This album proves the heart of the genre still lies in experimentation honed down to cohesive, memorable songs