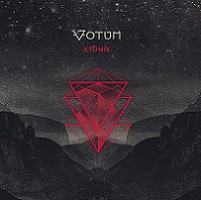 Already somewhat of an established name, Poland’s Votum did themselves a tremendous service by hooking up with Jens Borgen understudy David Castillo for the mix job on :KTONIK:, the band’s fourth album. Castillo, who has previously manned the boards for Katatonia and Opeth (quite good company to be in), has provided Votum with the proverbial “next-level” production job, which correlates nicely with the demonstrated progress found on :KTONIK:, an early 2016 progressive metal sleeper.

Hovering in and around the airy, swirling melodic sphere occasionally inhabited by the now passé djent bands, Votum makes quite good use of the dropped, heavy/low guitar tone. Thus, the band isn’t as much guided by their riff ideas as they are their songsmanship and keyboard flourishes. The soft ebb-and-flow that carries the album’s first two jams – “Satellite” and “Greed” are simply marvelous, particularly in how Votum clenches hold of various atmospheric elements that are subtly reminiscent of Mr. Devin Townsend.

Vocalist Bart Sobieraj can often be found working it in the smooth, mid-range ville, although he’s got a bit of persuasiveness to his voice, hence the more emphatic moments on “Vertical.” But as is the case with Voum, there’s not one overriding element. Their understated cohesiveness serves them well, especially across the graceful “Blackened Time,” or album closer, “Last Word.”

As indicated above, :KTONIK: is quite the sleeper of an album. Here, an otherwise unknown Polish progressive ensemble has created a standalone, sturdy prog metal album, the type that is unmistakably modern, yet never crosses the line into questionable territory, which as suggested, is djent. A would-be breakout album.