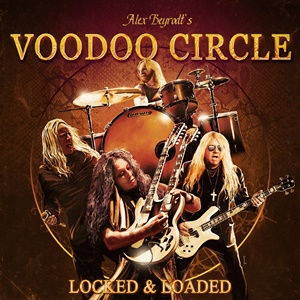 It’s easy to hear right away on the opening double salvo of “Flesh & Bone” and “Wasting Time” that bluesy melodic hard rock with high-pitched melodies and John Bonham-oriented drum tempos are top of mind when it comes to the arrangements, performances, and transitions here. Midway through the record, “Straight for the Heart” contains that Sykes-like riff charge, stellar guitar melodies, and Readman’s superior Coverdale-esque vocal charm, the song easily containing all the hallmarks to make the self-titled 1987 album back in the day. When choosing to hit a ballad note for “This Song Is for You”, Corvin’s organ foundation against Alex’s bristling softer to faster guitar activities weave around another emotional vocal performance – much like the mid 70’s Thin Lizzy against a Gary Moore track from say his Corridors of Power album. There are some dangerously similar ideas to other artists at times – “Devil with an Angel Smile” has a lot of that Rival Sons “Pressure and Time” groove, riff and vocal back and forth interplay during the verse sections especially, while “Eyes Full of Tears” has Readman replicating Coverdale to a tee throughout this semi-ballad, including the ‘wasted days… and sleepless nights’ lines from “Is This Love”.

Alex is a skilled, thoughtful songwriter and exemplary lead player beyond his obvious rhythm skills. Pairing up with Jacob Hansen to mix and master Locked & Loaded gives the final sound a much more current punch which could gain favor to a broader audience. Voodoo Circle release material that appeals to the generation who grew up on bluesy melodic hard rock from Europe in the 70’s and 80’s – and while not overly original, the execution and performances keep listener engagement high release after release.